Liveblogging my installation of Elementary OS. (Well, almost live: I'm editing as I go, but not posting till the process is complete.)

Note: Download times shouldn't be taken as gospel. I'm using the public Wi-Fi at King Sauna, and who knows how fast that is? Also, the act of blogging slows everything down a bit.

12:21 a.m.
Start downloading VirtualBox so I can create a VM.
12:24
Download done.
12:26
VirtualBox installed.
12:27
Click "New" in VirtualBox to create a guest image.
12:29
I picked Linux, but then it asked me what type? The logical choices seemed to be either Ubuntu (which Elementary is built on) or "Other Linux". No useful info on the Web, so I'll go with Ubuntu and see what happens. Also going with the recommended settings for RAM (512 MB) and virtual HD (8 GB, VDI format, dynamically allocated).
12:32
VM created. That was painless. Now, do I have to start it to install the OS from an ISO image? I'll check on this while downloading the ISO image.
12:34
Downloading what they describe as the 64-bit build of Luna. Uh oh, the file has "amd64" in its name. Will it work on my Intel Mac, or will I have to get the i386 build instead?
12:36
OK, apparently I can install an ISO image before starting the VM. I think I knew this at one point, but had forgotten it. :P
12:41
Insert newly downloaded ISO image into VM's virtual CD-ROM drive; start VM.
12:44 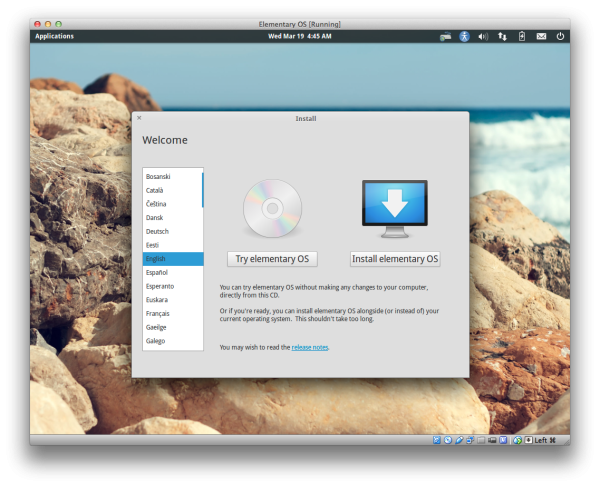 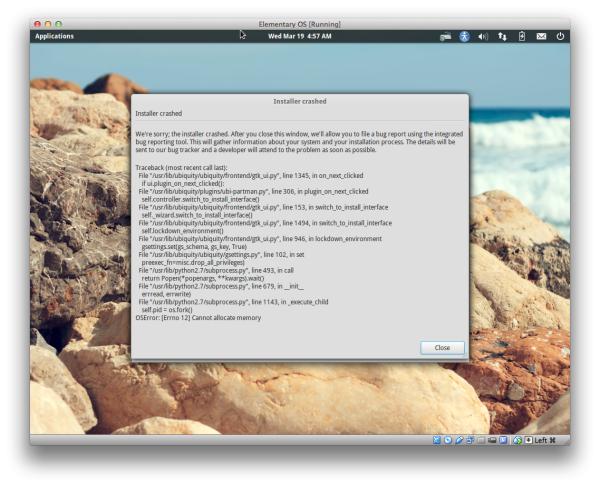 WTF? The installer crashed.
1:03
A quick Web search suggests that this is not an unheard-of bug in the Ubuntu installer, but I haven't seen a solution yet. When I clicked to dismiss the crash messages, eventually I wound up in a live desktop session so I could diagnose the problem…
1:06
Performance in the live desktop session is so abysmal as to be unusable (I suspect that this is an artifact of VM performance, not of Elementary itself). Gonna reboot the VM and retry.
1:08
VM rebooted. This time, I'm going to run a live desktop session first, so I can make sure that things are working OK.
1:09
Looks good. Performance is incredibly snappy, and I was able to open Midori (the included browser, WebKit based) and load Web pages. Great. Retrying installation. If that doesn't work, I'll give the VM more RAM.
1:11
Hmm. As soon as I ran the installer app, performance went all to hell. Maybe there's a VirtualBox issue.
1:13
Same crash. Doubling VM RAM to 1 GB.
1:17
I guess that was the problem. Installer is now working.
1:19
Nice. There's even a "detect keyboard layout" tool that has you press some keys and answer questions about your keycap labels. (Of course, I have a boring US English keyboard…)
1:23 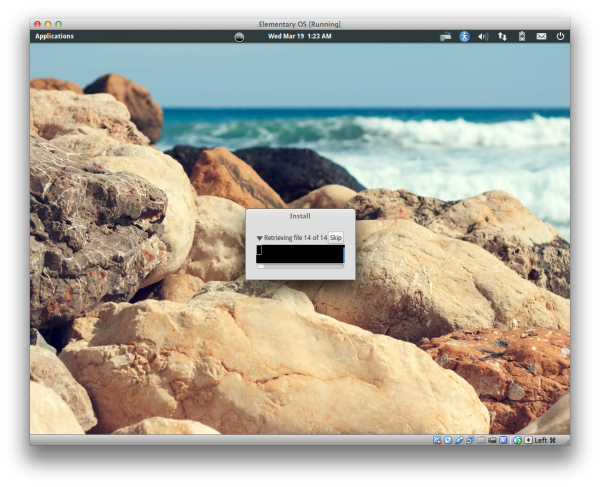 That's kind of annoying. I clicked the disclosure triangle during installation, but it doesn't look like the terminal-like window that shows up is actually expandable to the point where I can see what's going on.
1:26
Installation complete. I still have to add VirtualBox Guest Additions so I can make the Documents folder on my Mac visible to the VM.
1:28
On reboot, I had to virtually eject the virtual installation CD before Elementary would finish booting. :) Once that happened, boot and login proceeded flawlessly.
1:30
Shutting down VM so I can install Guest Additions.
1:31
Hmm, maybe I didn't have to shut down. So how do I install the additions?
1:32
The OS alerted me that I needed to update language support modules. Nice.
1:35
Following the instructions to install Guest Additions.
1:36
apt-get returned a surprising error: dpkg: error: dpkg status database is locked by another process. Retrying…
1:38
Worked on retry.
1:40 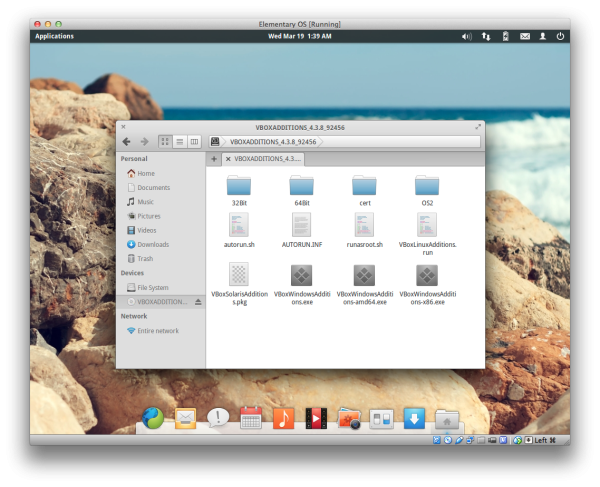 Nice file manager! Looks like the Finder and saves me from having to mess with mount points. But why isn't it in the Dock by default?
1:43
I had to run the Guest Additions installer with sudo. Not too hard to figure out, but I wish the instructions had said so.
1:44
Guest Additions installed.
1:53
Got my shared folder automatically mounting.
2:00
I need to add myself to the vboxsf group so I can read the shared folder. I'd like to do this without the command line, but there's no group manager in the System Settings application.
2:02
Ah, I found the User Accounts pane. I'm just not used to the way scrolling works here yet.
2:03
User Accounts doesn't do anything with group membership. Grrr.
2:05
I could do this from the command line, but it's a good excuse to look for other tools in Software Center. I like the Apple App Store-type interface, and I found an application called KUser that looked promising, but the reviews suggest it isn't worth it.
2:09
sudo usermod -a -G vboxsf marnen
2:11
But I still can't read that directory unless I'm root, even though I'm in the right group and permissions are rwxrwx---. Why not?
2:12
Apparently group membership is read at login. In 2014, why do we still have operating systems that work this way?
2:14
Logging out and in did the trick. Now, can I make a symlink to it in the file manager the way I can in the Finder with Cmd-Opt-drag?
2:23
Gah! Why is Files so poorly documented? And there's no OS help center the way even KDE had years ago?
2:25
Giving up and making the link from the command line.

OK, that's enough for basic OS and VM installation. Elementary looks good, but documentation is a little sketchy. At the same time, this is more usable and more attractive than any Linux I've so far worked with. We'll see how it performs over the next month.